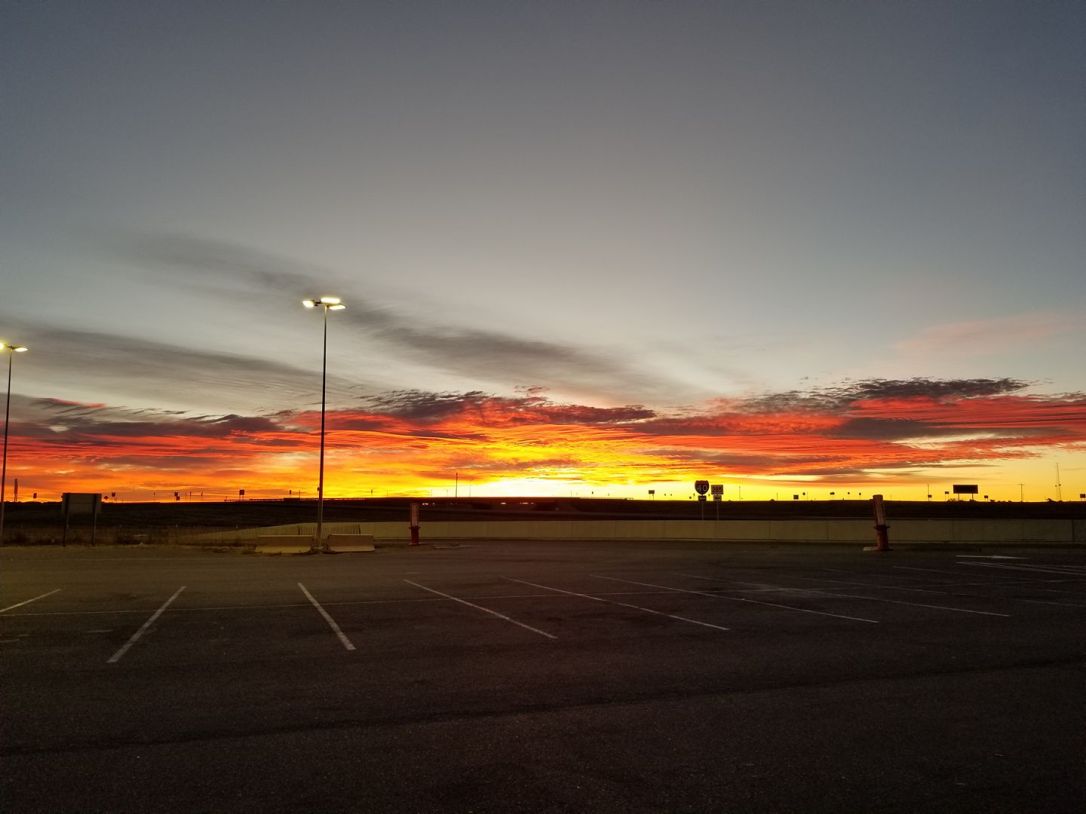 Got up early in the morning and headed back out to Clines Corners – a truck stop east of Albuquerque, and where I started on Thanksgiving.

It was a lot chillier than the picture above seems to indicate.  I had several layers of clothes on, including two jackets and long pants over my cycling shorts, and it was a couple hours after sunrise that I took the one jacket and the pants off, and not until almost 11AM that I was ready to take off the lighter jacket.

The goal was Fort Sumner, 102 miles southeast of Clines Corners.  The wind for the first 40 miles was coming at me from my right hand side, but it wasn’t terrible.  Then I turned toward the East and the wind picked up to the promised gusts of 25 mph.  In the same direction I was heading.  I tell you what – there is nothing like riding 60 miles with a 25 mph tailwind.  At one point I unclipped my shoes and just coasted because my feet were hurting, and I still maintained 18.5 mph on the super-flat road for almost 10 minutes.  It was entirely pleasant… except that if you come unclipped, all your weight is on your rear end, and you’re not shifting your weight consistently, so the “sits bones” give you a reminder pretty quickly that you’re not meant to be on the bicycle for more than half of the previous 24 hours.  All in all, it was my fastest century (100 mile) ride at just over 6 hours.  Pretty great.

On Saturday we got up early again and headed out to Fort Sumner (who knew that Billie the Kid died and was buried there?  Not me!) with the goal of Olton, TX – 126 miles away (and the halfway mark on the route). At 14 miles in I knew I was in trouble, as every time I took a drink of water I got more and more nauseated.  I stopped and caught my breath at a historical monument, and kept going. At just shy of 20 miles the nausea caught up to me, though, and I texted Randy and had him come get me.  I suspect it was just exhaustion, as by the time we were halfway back to Albuquerque I was feeling some better – though, not nearly well enough to ride again.  So we “checked out” of the Airbnb we had stayed in, and hit the road home at a little after noon local time.  I slept several of the hours on the way home, and we got home just before midnight.

View all posts by jypsyjillrides

2 thoughts on “Day after Thanksgiving and Saturday, November 25, 2017”

On April 20, 2019 I completed a bicycle ride from Westport, WA to Key West, FL – 3,800 miles, in 60 riding days.  The blog entries document the nearly two years of training, riding, heartbreak and joy of my life while learning how to live.

Life is a journey, ENJOY THE RIDE!